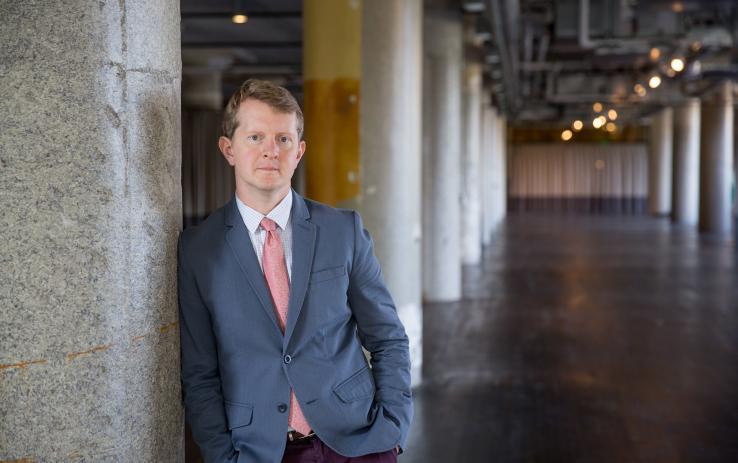 Ken Jennings became the stuff of legend when he beat fellow champs “Jeopardy James” Holzhauer and Brad Rutter to win $1 million and be named the Greatest Jeopardy Player of All Time (GOAT). The honor topped his previous achievements as one of the winningest game show contestants of all time and the holder of the longest Jeopardy! winning streak of all time. He still holds those records today, including the longest winning streak (74 consecutive games), highest regular-season winnings ($2,520,700) and highest average correct responses (35.9) records in Jeopardy! history. Ken went on to further fame representing the human race in a 2011 Jeopardy! match against IBM’s Watson supercomputer. In 2019, he returned to the spotlight when Jeopardy! phenom James Holzhauer (who Ken describes as “as close to Watson as a human can get”) came within $60,000 of Ken’s winnings record before being eliminated. A year later, he bested Holzhauer to be named “Greatest of All Time,” Upon winning, the former software engineer turned best-selling author, paid homage to the game show that he has loved and watched since childhood. "It is a real honor to be associated with a show that nobody ever has a bad thing to say about — It encourages learning, it makes smart kids feel like it’s okay to be smart and that’s always the kind of kid I was," he said. "I could not be prouder that I’m associated with it." As a speaker, Ken appears at college and corporate events nationwide, covering topics ranging from the importance of education to artificial intelligence (specifically his encounter with IBM’s Watson) to his love of geography (the subject of his New York Times best-selling book), always sharing his insider stories from behind the scenes at Jeopardy! He also participates in trivia nights or live quiz shows, as either a host or participant.

After his long reign on Jeopardy!, Ken used his winnings to live the life of his dreams and become a best-selling author. His 12 books include the New York Times best-seller Maphead: Charting the Wide, Weird World of Geography, Brainiac: Adventures in the Curious, Competitive, Compulsive World of Trivia Buffs, Ken Jenning’s Trivia Almanac: 8,888 Questions in 365 Days, Planet Funny: How Comedy Took Over Our Culture, Wonks, Because I Said So!: The Truth Behind the Myths, Tales and Warnings Every Generation Passes Down to Its Kids; and a children’s series, Junior Genius Guides. He is the co-host of Omnibus, a twice-weekly podcast that compiles strange-but-true stories for inclusion in a time capsule for future generations. He also serves as a resident expert on the Game Show Network’s Best Ever Trivia Show, in which three contestants face off against game show and trivia champions. Previously, Ken hosted two game shows on GSN and appeared in ads for FedEx, Microsoft, IBM and Allstate. He has made numerous television appearances, from The Tonight Show and Sesame Street to being interviewed as one of Barbara Walter’s most fascinating people of the year. Prior to becoming a Jeopardy! champ, Ken worked as a software engineer for a health care staffing company.